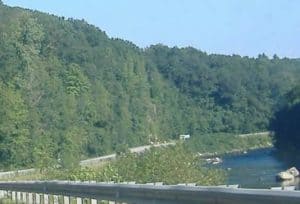 West River provides an outing full of life with its Class III and IV rapids flowing across a ten mile stretch of frothy whitewaters. The rafting season in this Massachusetts River continues all the way from Spring (mid-April) to Fall (mid-September).

The trip kicks off from Ball Mountain Dam and makes its way through the Jamaica State Park to Townsend Reservoir. The first eight miles from Ball Mountain boasts of continuous Class III technical rapids, which challenge beginners in a maze of boulders and ledges. The half-mile long Landslide Rapid is the first one to splash up some real good adventure. A large row of smooth, round boulders jam the river and form the largest rapids known as Dumplings. The river takes an S-turn at this point and dares the adventurers to show excellence in navigating skills. After Dumplings, the river opens up into the large and mellow Salmon Hole. The tourists can enjoy quality sightseeing in this stretch of Green Mountains, especially during the verdant foliage of spring or in the colorful rupture during autumn.

Townsend Reservoir greets at the end after some easier rapids like The Ledges. The West River rafting is regulated through scheduled dam releases in late April and early October. This event attracts rafters, canoeists and kayakers from all over the country. The West River also attracts anglers for its fishing avenues.