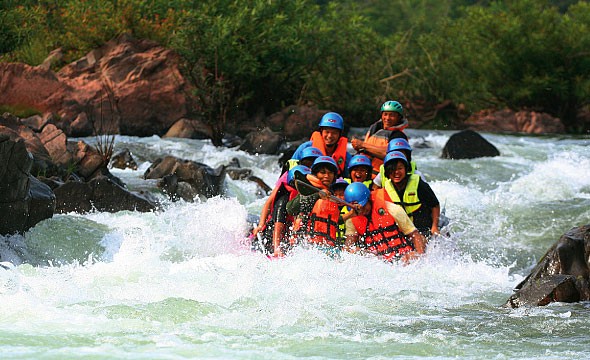 The Nam Wah River in Thailand streams through the Mae Jarim National Park. This long water body is divided into three separate sections – upper, middle and lower parts. Even though the entire river offers ample rafting scope, the most popular rafting section is the mid-section.

The rafting zone along the Nam Wah River stretches to almost 80 km in the watercourse, Nan being the place where all the rafting actions start. There are numerous tumultuous and mild rapids scattered all along the river course. A rafter is sure to encounter approximately 80 small and over 20 huge rapids while he moves through the numerous sections of the riveting waterway. The turbulent waters on the river are rated on a scale of Grade III, IV and V. So, it’s quite obvious that a rafting expedition on the Nam Wah River is laden with loads of excitement and gripping action.

The Nam Wah River remains at its best condition during the rainy season, since this time the volume increases to a great level. The upper section of the river is found to be highly deceitful; with dangerous waves coming up all of a sudden at various bends of the river. This section of the waterway has turned out to be quite perilous. Hence, for all amateur rafters, the river is considered inappropriate for traveling.

Moving further, you can come across a few more rapids in the river course and at places, the remarkable water body drops down from incredible steep cliffs. The upper- and mid-sections of Nam Wah River, owing to their action-packed waves, appeal in a big way to skilled rafters. However, the lower section with mild whitewaters is the best place for the beginners. So, if you want to join in the transfixing action and tame the absorbing whitewaters of the Nam Wah River, pack all the essentials and get set to jump into the spellbinding waves!