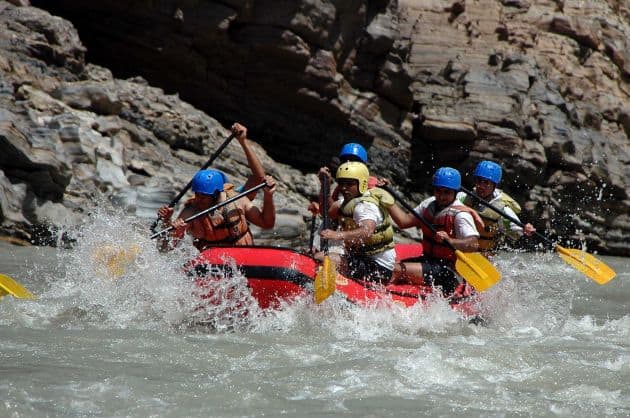 The Satluj river basin in Himachal Pradesh covers an area of about 6,553 square kilometers. To the east lies the Ngari region of Tibet; the Dhauladhar range forms its southern boundary, separating it from Uttarkashi District of Uttar Pradesh and the Shimla District of Himachal Pradesh. In the west, the Srikhand Dhar marks the boundary between Kinnaur and Kulu. Spiti is on the northern border of Kinnaur — the boundary being formed by the rivers Spiti and Pare Chu near the Indo-Tibetan border.

The source of the  Satluj lies in near the Mansarovar Lake at 18500 ft. in the Tibetan Plateau. The Satluj is one of only three Trans Himalayan rivers originating in the high Tibetan Plateau that cuts across the mighty Himalayan ranges. The other two are the Indus and the Brahmaputra. It enters India through a fearsome gorge near the Shipki La. Thereafter, it flows through the cold tracts of Kinnaur to the hamlet of Wangtoo. It is one of the major tributaries of the Indus River system. In its passage across Kinnaur, the Satluj River successively crosses three great mountain ranges — the Zanskar range, the Great Himalayan range and the Dhauladhar range.

The Satluj River has carved a deep gorge across the main or Great Himalaya near Pshong- Tong. In the southern part of this valley, there is extensive cultivation of fruits and agricultural crops. Barring some parts, extensive vineyards, thriving crops and orchards of apricot, apples and grapes are to be found in the entire region.

A short video of the Satluf from the road side.