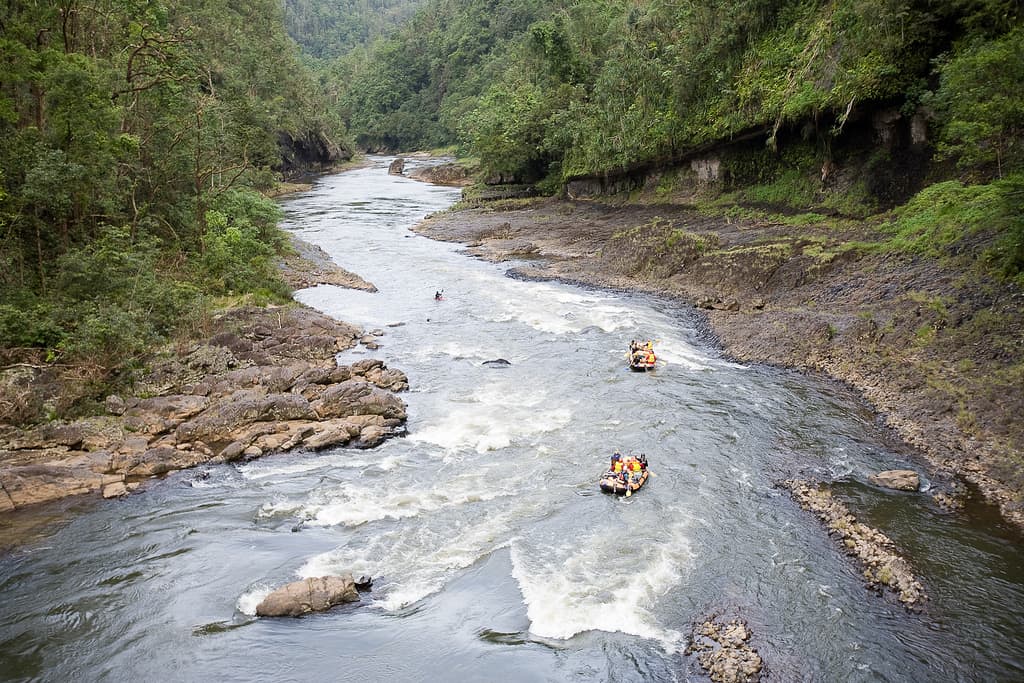 The North Johnstone River has its source in the plateau of the north tropical coast and drifts through the steep narrow gorges of Australia. The waterway then meets up with the South Johnstone River at Innisfail in the coastal plains. A river famous for its astounding volume of water, the waterway gets all its force from the heavy rainfall of the area.

One of the most popular tourist destinations of Australia is the Great Barrier Reef. However, only a few kilometers away, you can come across another UNESCO World Heritage listed water body – the enthralling North Johnstone River! Drifting along one of the oldest rainforests of Australia, the fabulous river makes its way along the Crocodile Dundee country.

The North Johnstone River, after completing its long journey, ultimately empties into the Pacific Ocean. Once you embark on a rafting trip on the fascinating river, you can surely explore the clandestine aboriginal caves, cicadia palms and innumerable whitewaters of Class IV and V level.

The North Johnstone River is also well-known for its impressive array of rapids such as the “Berlin Wall”, “Black Ass Fall”, “Mordor”, “Mineshaft” and “Snake Falls”. Apart from the tantalizing torrents, you get to experience the rich wildlife of this region, as you witness the attention-grabbing residents of the dense jungles! The forest on the riverside is home to water dragons, saltwater crocodiles and bird spiders. Interestingly, you can also catch a glimpse of the unique stinging trees and the flowering ginger trees.

Given its enormous volume, the North Johnstone River brings in great challenges for all its rafters. So, are you all set to grab all the fun and make your day by watching the pristine beauty of the Australian rainforests? You can also roll through the tumultuous torrents and complete this epic whitewater rafting journey. The delightful expedition down the North Johnstone River can surely turn out to be the most memorable trip of your life!