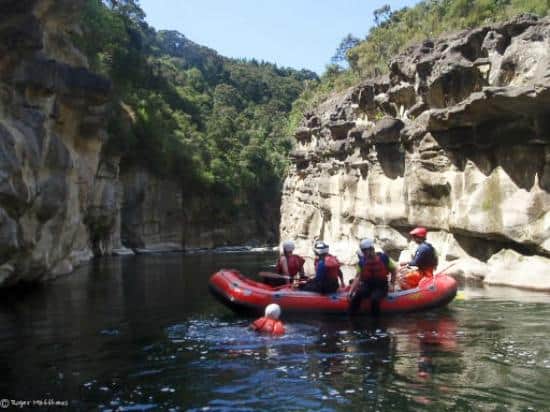 The Mohaka River is placed in the eastern North Island portion of New Zealand. The exact location of the water body is, however, the northern Hawke’s Bay. The river travels along east-southeast for almost 70 km along the Ahimanawa Range. Moving further, the waterway flows into the Hawke Bay, located near the Mohaka, which is placed almost 20 km towards southwest of Wairoa.

The upper reaches of the Mohaka River is the place for conducting several recreational water sports; whitewater rafting happens to be one of them. The rafting expedition can run from 2 to 6 days. In the initial sections of the river, the waters are rather mild and can be easily treaded by the beginners. The tranquil waters will provide you with loads of excitement; add to this the breathtaking scenery by the riverside!

Further in the exhilarating rafting trip, the speed of the whitewaters gets totally changed and the currents get a higher lap. The Mohaka River then passes through the picturesque valleys and gorges of New Zealand, one of which is the Te Hoe Gorge. Here, the waters get quite wild and the turbulent torrents are rated as Grade V level. In the lower reaches, the whitewaters flow at an exceedingly fast rate, giving you the opportunity to enjoy an enthralling whitewater ride!

Another major aspect of the Mohaka River is its rich fish reserve, which makes the water body an important trout fishery center. For all adrenalin junkies, this river has a lot to offer. Teamed with torrents from Grade III to V, the river offers stunning natural scenery. Now, once you plan to make that enticing rafting expedition down the river, make sure you carry a wetsuit, crash helmet and a lifejacket. So, get prepared for your upcoming wet mission and race through the captivating waves of this mesmerizing water body.