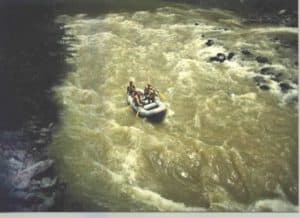 With rafting trips running for approximately eight miles and having average gradient of thirty-five feet per mile, the rapids in Nantahala River mostly belong to the class II and III category. Set amidst picturesque landscapes and tranquil natural beauty, some of the main features that set Nantahala River apart from other river rafting sites are its consistent current and steady waves. Once considered a member of the Class V category, the most notable rapids of Nantahala River remains even today Nantahala Falls, Patton’s Run and Delebar’s Rock. Situated at the southern edge of the Great Smoky Mountains National Park, the Nantahala River is ideal both for first time rafters and youth groups and veteran rafters in quest of new adventures. With swift currents, crystal clear water and lush green vegetations all around, the Nantahala River is today one of the best whitewater rafting sites the country has on offer.