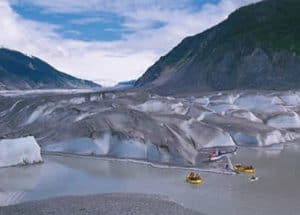 A remote wilderness setting, rafted by only a chosen few and spectacular ecological diversity makes Klinaklini a coveted spot among rafting enthusiasts. The river was first navigated in 1997 by a group of Men’s Journal Magazine. A trip across Klinaklini is not just whitewater thrill. Inaccessibility of certain areas means that you have to heli-hike through enormous snowfields and alpine pastures.

The Klinaklini is a major river of British Columbia. Its headwaters originate in the northern basins of Pantheon Range and the river traverses through mighty mountains and pleasant meadows, through wetlands and lush forests before heading to its mouth at Knight Inlet.

The river gushes through constricted canyon walls and flows out through a deep coastal fjord. All through this exciting route, the whitewaters of Klinaklini offer Class III-IV action with thrilling rapids like Little Drop of Horrors. The biggest of them all is the famous Nobody Move rapid.

This 195 kilometers trail is scattered with an abundant population of wildlife. Mountain goats, big horn sheep, bald eagles, grizzly bears, black bears, weasels, coyotes, cougars, wolverines and lynx throng the valley in huge numbers. The river is known for its salmon and euchalon population. Low tourist interventions in these areas have helped to maintain the biological diversity of this place.

Heli-hiking across the Mount Waddington (highest peak in British Columbia) and the Silverthrone glaciers can truly be an invigorating experience. The options in Klinaklini are numerous and none of them will disappoint you. So plan your trips beforehand. Rafting across the Klinaklini can prove to be a memory worth cherishing.