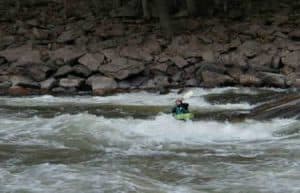 Hemmed between Summersville Dam and Swiss, the Gauley river rafting spot is a whopping 668 feet drop in 26 miles with more than 120 thrilling rapids to entice the senses of the brave. The chosen site for the 2001 World Whitewater Rafting Championships is considered to be one of the best rafting destinations in the world. Gauley river  is nothing less than a pilgrimage to over 60,000 hardcore enthusiasts who flock the magnificent canyon every year for some extreme Class III-V action.

Fall witnesses the grand release of gallons of water from the Summersville Dam controlled by the US Army Corps of Engineers. This is the most preferred highwater season of Gauley. The Upper Gauley is strictly meant for veteran rafters. The average gradient along the constricted gorge is 32 feet per mile, with numerous rapids ranging from Class III to V+. The best known among the rapids are the “big five”. Pillow Rock, Lost Paddle, Iron Ring and Sweet’s Falls are notorious enough to give some tough time even to the experienced rafters. The Lower Gauley is perhaps less demanding, but certainly nothing short of high excitement. Rapids like Mash, Heaven Help You, Pure Screaming Hell, Roller Coaster, Julie’s Juicer, Ender Rapids and Backender range in Class IV action. The rapids are followed by calmer pools, which offer a respite from continuous roller coasting along the rivers dynamic hydraulics. You can also have a nice relaxing swim in these waters or dive from the famous Jump Rock.

The crystal clear waters of Gauley flowing between the rugged solitudes of West Virginia Gorge create a spectacular wilderness setting, especially during the diversely colored foliage of autumn.

Gauley Fest is a popular festival started in 1983 to commemorate the historic struggle against the proposed hydroelectric project which would have spoilt the whitewaters of Gauley. This three day fest features live performances, sale of whitewater equipments, food, beer and a silent auction.