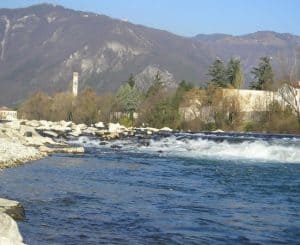 River Brenta, a popular Italian river, passes through the autonomous province of Trento and finally drains into the Adriatic Sea. A 174 km long river, River Brenta has a long history, dating back to the 16th century. During those times, a canal was constructed from Stra (a village) up to the Adriatic Sea, sidestepping the Venetian lagoon, which was a secondary channel.

Well, four centuries later, it still remains as a prominent river of the region. River Brenta, with its spectacular view of landscapes and unusual natural beauty, offers all its visitors ample scope to explore the picturesque surroundings. Bounded by majestic rings of mountains, River Brenta moves along the valley, making enough opportunities for all interested rafters who yearn for a good ride along the whitewaters. The river sports several rapids with spectacular descents as the river meanders through numerous bends. At each bend, the river unexpectedly opens to boundless panoramas.

The Brenta River and the green valley surrounding it offer a magnificent view to all the tourists. While you slide through the tumultuous waves and get past the huge whitewaters, you can sense the excitement and feel your pulse rate soaring. As the waterway moves through woods and passes several streams and makes you drenched in the river water, you are sure to be dazzled by the amazing scenic beauty of the place. While you plan to explore the different rapids and get immersed in the water, make sure to take along all the essentialities. The hydro speed will indeed enthrall you, but for a safe ride make sure to take along an experienced rafter to guide you. So, to break out from the boredom of the regular life and spend some exciting time in the river bed, the River Brenta is the best place to visit.